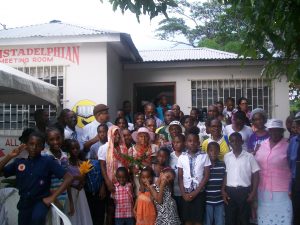 Surely, every day with Jesus is sweeter than the day before. This experience is a great one.  The greetings were friendly. The smiles were real and the hugs were warm. There was spontaneous expression of happiness all over the faces. The joy of meeting together as one in the Lord could be felt – “Come ye that love the Lord and let your joys be known”. This was exactly the mood that about 100 brethren, sisters, friends and young people exhibited at the annual Fraternal Gathering on October 21, 2013 in the May Pen Ecclesial hall. We were in one accord to exalt the name of our Lord God.

The tent at the front was as close as it could be to the hall. This was necessary to assist in accommodation for the day. The windows and doors of the meeting room were wide open so the cool westerly winds came in with great delight. The sun peeped in for a short while, but was no match for the continued coolness of the welcomed winds.

The theme for the day was, “The Ways of Righteousness”.

The Righteousness of Elijah

Brother Marlon Jackson of Round Hill Ecclesia interestingly drew our attention to the righteousness of Elijah – I Kings 17:1-6. God used the prophet as an answer to Ahab’s and Jezebel’s wicked deeds. Baalism was very rampant in those days and God sent His righteous servant to eradicate such a vile, cruel religion. Elijah showed undaunted courage, zealousness, calmness and uprightness which placed him among the most outstanding characters produced by Israel.

Elijah loved God greatly. God used him to stop rain from falling for some years. He proved who was the true and living God on Mount Carmel, when he had an encounter with the worshippers of Baal. God fed Elijah by a raven and a widow from Zarephath when a jar of meal and a cruise of oil never failed because of his righteous life style.

For God to use us, we have to avail ourselves. Show trust and confidence in the living God and exhibit a full life of righteousness. Display the characteristics of the “Fruit of the Spirit” in Galatians 5:22-23.  Follow the marvelous example of Elijah. He stood for righteousness in all circumstances. Let us be vigilant and become servants of Elijah’s God.

The Righteousness of Daniel

Brother Ray Arthurs from Broughton excitingly gave the second talk. Reading was from Daniel chapter 1.  Daniel was a remarkable man, absolutely unwavering in his own conviction. King Nebuchadnezzar tried very hard to change Daniel & his friends. The Lord gave them firm determination to be true, whatever the situation.

Daniel refused to eat the king’s food, knowing from the law that it might have been offered to idols. He kept his righteousness. Although Daniel’s three (3) friends knew the terrible punishment if they refused to bow down to Nebuchadnezzar’s image, they stood firm to their righteousness. The angel of God protected them in the fiery furnace and there was not a scorch on them. The Lord sent His angel and shut the lions’ mouth. Darius realized that no other God could deliver after that sort and that only Daniel’s God should be worshipped.

It is also clear that we carry our religion wherever we go. Read the bible and pray every day. Trust the Lord in all things. Always make our decisions with God in our hearts and He will see us through. The eyes of the Lord are over the righteous and His ears are open to their prayers.

The essence of the group discussions showed that walking, standing or sitting in the way of righteousness is the only acceptable way forward to the kingdom of God. These options should be taken seriously, as God is a righteous Father and if we would follow Him, we have to be doers of righteousness. Don’t take lightly what God has done for us – Eph. 2:8&9. If we purpose in our hearts to not sin against God and to stay in the way of righteousness, God’s grace is sufficient to keep us there.

God wants us to share the good news right where we are so that when we stand before Him one day, He can say, “Mission accomplished!”.  True believers need to adhere to the righteousness of Elijah, Daniel and other sincere servants of God.  They were inclined to doing the purpose of the Lord God. These examples were written for our admonition and learning.

Let us go where Jesus would have us go, do what he would have us do. Remember that faith & works walk hand in hand. We should visit the sick, support the activities of the ecclesias, communicate with those in isolation, be strong and do works of righteousness.

Deliverance of the Righteous

Bro Keith Kinlocke of Spanish Town was emphatic in giving his exhortation about how God uses different strategies to deliver the righteous.  He will certainly deliver us but we have to do our part. There is an outstanding principle throughout the scriptures that we work out our salvation with trembling and fear. We have the assurance that God works with and through us to carry out His plan and purpose.  Never doubt the promises of God. There are too many evidence of His power.

There are times when the offender behaves in such a way as to bring about his own destruction and deliverance to the people of God (Deut 2:30). When the King of Syria realized that Elisha was the informer in the camp, he ordered his governors to camp around the city by night in preparation to attack and destroy Israel. Elisha’s servants were afraid but he assured them that the Lord would be their deliverer. The Syrians were smitten with blindness – 2Kings 6:1-25, while Israel was delivered. Elisha knew that there was greater strength in the unseen reality of the host of heaven than in the visible situation in the Syrian camp.

Again, in Isaiah 36:14&15, the Assyrian king challenged God’s greatness when he told the people not to trust in Hezekiah’s God for He couldn’t deliver them. But in chapter 37:36, God smote them and brought deliverance to His people.  Do we show faith in the God we serve? Daniel showed extraordinary faith in the God he served. He is our God too.  Let us endeavour to live an acceptable life before God so that He finds it pleasurable to deliver us in times of trouble and eventually enter us into eternal life. The right hand of God and His loving arms will carry us through.

During the day we enjoyed the well appreciated convenience of two female wash rooms and one for the male, thanks to the CBMC through the CBMJ.  Previously there was only one washroom for all.  Attending this Fraternal Gathering was a real blessing to us. We were refreshed and motivated to let our light shine even brighter, so that our righteousness can be seen in our actions.