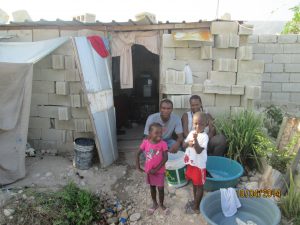 In early October I went to Haiti to visit Gironald Julien, a friend I have known since 2010. Our paths would not normally have crossed except for the fact that Gironald, along with his wife Esther, had travelled to Ecuador in 2010 as refugees in the aftermath of the devastating earthquake of 200X that left so many homeless. My family and I spent a few months in Ecuador during 2010/2011 and were introduced to Gironald and Esther, who were renting a room from the grandparents of my wife Maribel.

Gironald was very interested in knowing more about the Bible and already believed, based on his own study, that God was one. We introduced him to the ecclesia in Quito where he attended regularly and enjoyed the opportunity to study with the brothers and sisters, as well as with the Hunters (Kevin and Rebekah) who spent time there in 2011.

In late 2011 Gironald and Esther decided to return to Haiti to try and re-establish their lives there. They struggled, and continue to struggle, in the process of rebuilding what was lost. However, in the midst of these struggles Gironald did not lose his faith nor the desire to grow his understanding of God and His plan. Gironald continued to study the Bible regularly and came to the decision this year that he wanted to be baptized. 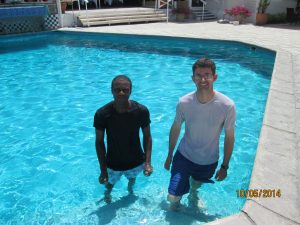 I planned a trip for Early October for us to discuss his beliefs face to face and to help arrange for his baptism. We spent a couple of days reviewing the scriptures and talking about his beliefs. Gironald gave a good confession of faith based on a sound understanding of Bible teachings. He was baptized on Sunday, October 5th into the saving name of Jesus. After his baptism we enjoyed a meal together and the following morning, before my departure, we broke bread.

Gironald aspires to teach others in his neighbourhood about God’s word and has started some neighbors out on a Christadelphian Bible course. God willing, his efforts may lead others to better understand their Bibles and God’s plan for them.