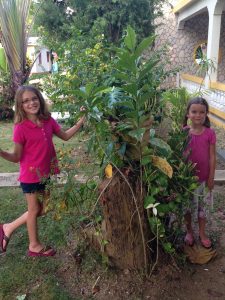 When Nathan and I were newly married and venturing into the mission field together (India), we carried with us the romantic notion that one day it would be wonderful to take our as-yet-to-be-realized children with us, to expose them early and often to different cultures and the rigors of travel, and most importantly, to the joys and hard work of missionary life. “When the youngest is five,” we told ourselves, our ignorance blissful.

Our romantic notions were the shattered with the arrival of babies and the fog of exhaustion that parenting brings, with the demands of their ever-constant needs and the reordering of our family from a twosome to a foursome. We came to terms with the realities involved in taking little people along on a trip to Somewhere Different, and stayed at home.

But they grew, as babies do, and our desire to be involved in missionary work remained, and whilst Talia’s fifth year came and went without a foray into the field, her sixth year rolled round and God gave us the opportunity to join Brother Don Luff on a visit to Jamaica. So at the ages of nearly 9 and 6, we packed up Zinnia and Talia, and took them on their first adventure to the West Indies to see that God’s truth is the same everywhere.

How fun it will be, we told them, and just to be sure it was, we filled backpacks with books and colored pencils, and loaded up two iPods with audiobooks and handed them one each. 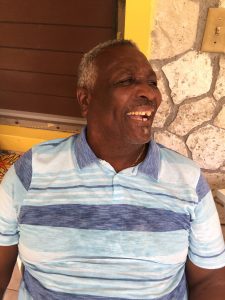 And how fun it was! We arrived several days earlier than Don, partly to enjoy a few days on the beach, and partly to let the girls acclimatize gently to being Somewhere So Different.  And it was different. The turquoise waters of the Caribbean Sea were just a three minute walk away, and lizards ran all over bougainvillea in the guesthouse gardens. The indomitable and fantastic Brother Ray Arthurs was our very close neighbor, with his big laugh and bigger faith welcoming us to the island. Mangoes fell like great golden raindrops. Ripe breadfruit plummeted from the trees, splattering messily at our feet. Gigantic land crabs scuttled around in the grass, as abundant as the bunny rabbits in Virginia.

To the girls, it smelled a little funky and the bathrooms were weird. The guesthouse rooms didn’t look quite like hotels in the States. Menus contained suspicious items like salt fish and callaloo. It was hot, and the air conditioner died. Someone small accidentally locked herself in the bathroom. Mosquitoes consumed our fresh flesh.

So we smoothed the passage a little, and rode a glass-bottomed boat out to a reef, snorkeling with the pretty fish. We ordered BLTs instead of salt fish, banana smoothies instead of beetroot juice, and played in the beautiful water. Without realizing it was happening to them, the girls adjusted and when Brother Don arrived three days after us, we were ready to work. 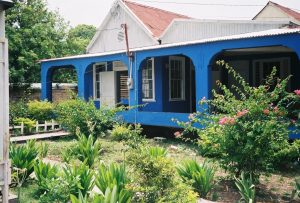 In addition to the fun of controlling their own audiobook destiny, the next best thing for them about traveling in Jamaica was the complete lack of seatbelts in the back seat of any vehicle. On Tuesday morning, six of us piled into Brother Ray’s pickup to head out to the Harvey River Ecclesia, Don with his long legs in the front, our family of four in the back (it was a 2-seater Toyota 4-wheel drive pickup). When we screeched to a halt to pick up two elderly sisters waiting for us on the roadside, we deferred to our elders and the four of us climbed into the bed of the pick-up. With hair blowing every which way and the sun beating down, the girls snapped headphones over their ears, and settled in for the ride of their little lives along a twisty, bendy road under the lush, towering bamboo, up the mountain to Harvey River. 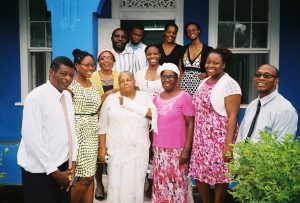 Harvey River is a rural spot, and home to a small ecclesia of one brother and four sisters. We broke bread with them, reminded of our future hope in the Kingdom. More immediate for the girls was the hope of dabbling their feet in the river which runs right below the hall, and as soon as meeting was over, they took off down the hill, squealing at the prospect of splashing in cool water on a hot day.

For Nathan and me, each place, each ecclesia we visited was an opportunity to encourage our brethren, and to be encouraged in return. For our girls, it was an opportunity to explore somewhere new, to see what lay beyond the bend in the trail or just the over the hill. Anything that inspired excitement in them and developed their desire to both be there and return some day, seemed worth encouraging. Getting stuck in a thunderstorm in the middle of a rainforest on a road to nowhere and having to get out of the pick-up into the pouring rain so it could make it up the hill? This is fun, girls! FUN! 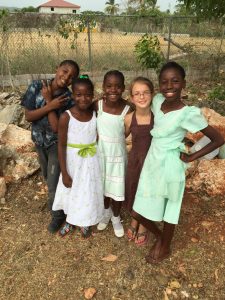 The second half of our trip brought a different kind of adventure. The May Pen Ecclesia has a vibrant Sunday school, and Zinnia happily romped around in the back yard of the ecclesial hall with a gaggle of girls after meeting. Tali, meanwhile, was busy making mischief with little Akilah Johnson, daughter of Brother Patrick and the late Sister Annette. The two of them, sprung from the same zesty bean pod, spent three days chasing bugs and making see-saws from rickety bricks and splintery pieces of wood. Children, regardless of where they grow up, are full of ideas.

Talia asked to stay in Jamaica for three more months, with or without the rest of us!! Zinnia conceded that maybe we could go back there some day, just so long as it was at least five years hence. 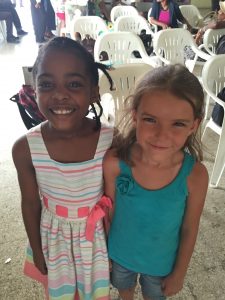 There’s nothing easy about going anywhere with children, not even to the post office, and the effort involved increases exponentially with each different element added. Scorching temperatures and ravenous mosquitoes are not foreign to our little Virginians, but not being able to retreat into air conditioning is. Sitting through meeting once a week? No problem. Four memorial services at different ecclesias, two evening ecclesial Bible Classes, a home Bible Class and a Mutual Improvement Day for all ages (about 90 in attendance) at the Kingston Ecclesial Hall in the course of one week? That’s bit more of a stretch. Throw in some hard pews and intense heat, and the discomfort (and vocalization of it) increases.

Was it always fun?  By no means. But was it good?  Oh yes! Our little people stretched and grew, learning so much more than they realize and next time, (and God willing, there will be a next time), they’ll grow and learn a little more. So will we.