The Truth in El Salvador 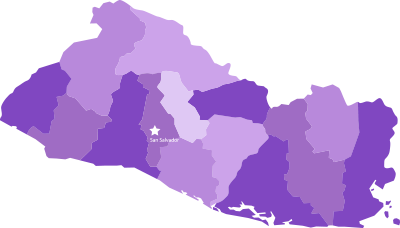 After expressing an interest to participate in a CBMA mission effort to Central America, I was connected with Bro. Don Luff of Brantford, Ontario, and he gently encouraged me in the weeks ahead of the planned visit in late May. I prepared 3 classes using PowerPoint in English, and set about to translate them to Spanish using Google, as it had been over 50 years since I took Spanish in High School and I was a bit rusty. I found that using Google was far from successful, as it had trouble translating the incomplete sentences in my ‘bullet points’ of the presentation. Google translated the Catholic Pope as ‘El Papa Frite’, or in other words, the big French fry. A better plan was to engage my colleagues at work, most of whom were from Central America originally. They were very helpful and showed interest especially in the “Mark of the Beast” presentation.

On landing in San Salvador, I was greeted by an exuberant Bro. Manuel and Sis. Sylvia Fernandez. The warm hugs and welcome was quite indicative of the reception that we would soon receive from the members of the three ecclesias we planned to visit over the next few days. Bro. Don joined us in the airport and we set off to San Salvador to stay at the home of Bro. Manuel and Sis. Sylvia.

Saturday we traveled to the Sonsonate Ecclesia, where about 30 members including children, were delighted to see us. Many of them spoke better English than I could speak Spanish. Bro. Don helped me present the class on “The Crossing of the Red Sea”, and we were able to show a probable crossing point by Israel of the Gulf of Aqaba capped with a mini-video of divers locating coral encrusted structures of chariot wheels and axles. The Ecclesia managed with my feeble Spanish, which was interpreted by Bro. Don, who also presented a Bible Study of the “Vineyard of the Lord”. The day finished up with a hot meal and warm fellowship together.

On Sunday, many of the members of the Sonsonate and Usulatán Ecclesias joined us at the San Salvador Ecclesial Hall for Memorial Service. There were about 120 Bre. and Sis. including a goodly number of children. All of the people were quite warm and friendly and the bonding together of brothers and sisters in the one faith is something that is quite exhilarating to experience. It certainly helps to build one’s faith in the Lord, and demonstrates the fact that we are truly one family.

On Tuesday we visited the Usulatán Ecclesia located about two hours to the South. Set in a small community replete with chickens and dogs, we found a very faithful group who had labored together for more than a week prior to our arrival. Originally a small house, the hall was transformed with a new concrete floor, fresh paint inside and outside, a new electrical service, and then a podium and benches were added.

Outside, a new patio cover and sanitary facilities had been completed. We were told that all of the members had participated in readying the hall for this special day. Oven baked chicken and rice were prepared in the outdoor brick oven, and was enjoyed by all. Bro. Don presented the “Christadelphians: Who are We and What do We Believe?” and I presented the “Mark of the Beast”. The classes were well received and the warm fellowship continued long after it turned dark. Bro. Julio Garcia expressed everyone’s thanks to the CBMA for its generosity in helping with the hall refurbishing. His closing prayer was filled with thanksgiving and tearful emotions, and it touched every heart.

Yes, the Truth is quite alive in El Salvador, and what a wonderful experience it was.